.In 1958 Start Aloys and Ben Löwik with pigeons. First 25 year program of flights 100 to 720 kilometer, Then from 1984 exclusively on the National flights, especially long distance. As all in 1985 successful. Important was the contribution of the "Old Couple" , 2 young pigeons 1978 purchased, that formidable inherited and now in 2014 still forms the basis of our best racing- and breeding pigeons. This 2 young pigeons descended both from the best long distance pigeons that flew in the east of the country. 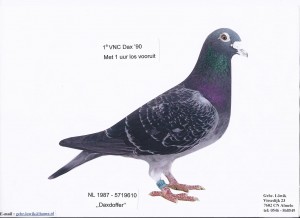 The black cock came from Gerard Telgenhof , directly from his great “Fonddoffer” , race Aarden x Hermans. The chequer white pin hen came from Theo Klein Haarhuis from his formidable “41” , that was paired on that moment with a niece of him. The race was Grondelaers x Aarden . Descendants of the "Old Couple" today still forms the basis of our current strain . Because we do a lot of inbreeding and line breeding, we have over the years, relatively few new birds introduced as new blood. These came from. Dick Stern and several pigeons originally Aarden, Lazeroms, van de Wegen and Theelen. These new birds are crossed on our inbred line and then youngsters of these crossings are very strictly selected. Only the best can stay on our loft.. Because we do very much inbreeding, almost every year all pigeons become an other partner. Therefore, we have no fixed main couples.

We play for years 30 koppels duiven op nest. Furthermore, we have 9 kweekkoppels. In our loft we have grates on the floor of the old birds, so there should not be cleaned every time. At the loft of the youngsters we use wood chips . Once a year we clean the loft ..

Feeding the pigeons is quite simple. The old birds are fed generously , There is usually a bit of food in the loft. If everything is eaten, we refille again, 3 or 4 x daily in summer. 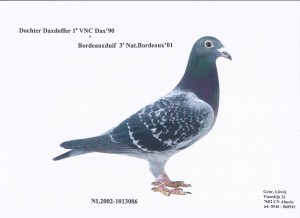 There is always grit / red stone and vitamineral in the loft. This will be refreshed regularly. The food is most of the time normal racing feed, in the breeding period it is sometimes supplemented by better feed . During the moulting we add a little bit of small feed, and in winter a little bit of barley. The youngsters are less generously fed. When thei are outside the loft they have to obey when I call them.

Once a week the pigeons can take a bath. In winter, all the pigeons are vaccinated against smallpox and PMV . In recent years we cure and vaccinate against paratyphoid. We pair our pigeons usually around Candlemas ( 2 Febr.) All racers must raise 1 youngster and are separated again until early or mid-May. In April / May, all pigeons must race 5 races for training. , (seperated). We do not or hardly train self our pigeons, although some passionate fanciers here have success with it . We do not let fire the candle on 2 sides. Our old pigeons annually do 2 marathon races , and yearlings once. 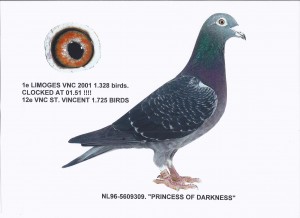 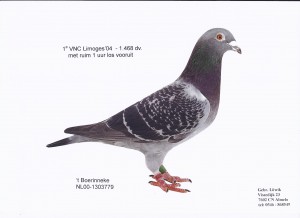 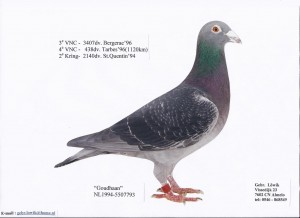 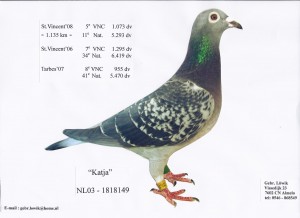 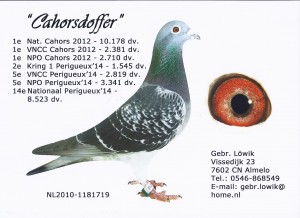 A very brief overview of the championships won on the long distances from 1985 th till 2014 :

Many top results and top marks were achieved in the years. Some highlights of the past few years : 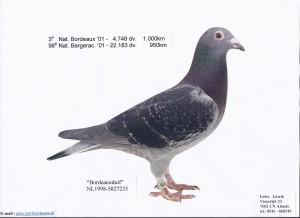 In the attached reports you can find more information on previous years.