The first long distance race of the season in Division 9 from Brive delivered on Saturday 5 juni. was a victory for the NL 07-1274314 of Gebr. Löwik from Twente Almelo. 'Rambo' is the bird that was not only the fastest of department 9, but also of zone 2 of the Northern Union(International). 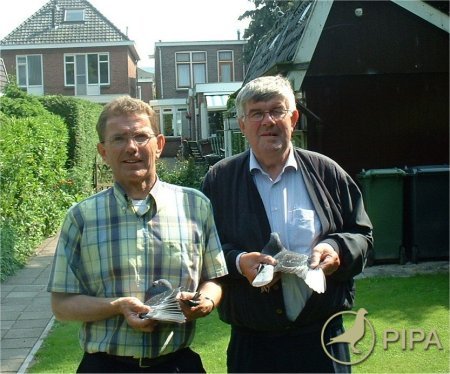 Ben and Aloys Löwik from Almelo, Winners of NPO Brive in Section 9.

With a speed of 1.092 mpm. 'Rambo' is 88 mpm. faster than the No. Two of the NPO. That is one hour and fifteen minutes faster! After the message on teletext that morning there was a constant stream of congratulations, flowers and phone calls. The club's Reisduif 'Almelo - the N.I.C. – Fondclub and VNCC.

The brothers Ben and Aloys Löwik from Almelo are not unknown in the world of long distance eastern Netherlands. More than half a century they have been racing together in combination. Twenty-five years ago, they decided to race only on the long distances , and especially the very long distance races, which also count for the VNCC championship. This way of racing becomes more and more popular in Department 9 .. The brothers Löwik are there for many years the leading fanciers.. During the last 25 year they played 18 year in the first ten General Champions, including four first and four second places. Then you must really be super-fanciers! They do this with a very homogeneous strain of pigeons, which has its origins in successful long distance pigeons from the seventies. They come from the best fanciers on the long distance in the seventies as Klein Haarhuis, Geesteren, Dick Stern, Ruurlo and Gerard Telgenhof, Harbrinkhoek ( Jos Hermans-pigeons). Also pigeons of Benno Wildenborg, Lichtenvoorde and Gerard Besselink from Almelo (Red Wijnacker pigeons) were important for the building of the strain . Later additions came from Harold Zwiers, Den Ham and Jan Becker, Nijverdal. The Löwik-pigeons not only perform well in tough races with differrent weather, but also with wind behind. They prefer dark weather.

They do very much inbreeding to keep intact the strain. Further top-results are. first prizes at the competitions VNCC from Dax in 1986 and 1990 (in 1986 with a hen of the old couple and 1990 the Daxdoffer, grandfather of 'Rambo') and Limoges in 2004 ( one hour ahead) with a hen of the old couple and 2001, they raced 1 th till 4 th in the VNCC! The racers, 30 couples old birds that are raced on the nest and the youngsters, sit at the 60 year old Ben Löwik. He has a deep garden, whit enough space for 30 pairs and about 60 young pigeons..

The breeders live at the 65 jarige Aloys Löwik. Half of the 60 old racers are yearlings, being trained on short distances , middle distance and long distance, and one time on a multi-day long distance race. They want to know what's the quality of every pigeon as soon as possible.. The pigeons of two years and older must race 2 or 3 longdistance races.. Early February we pair our pigeons and each couple must feed a youngster. Late March / early April, they are separated and trained on the short distances. Then they are paired up again, so that they are in the correct position for the first or second longdistance race. The pigeons make good results into old age. The loft is not obscured and the use of medicins is virtually nil. In the winter season we work much with garlic and onion. Learning of the youngsters is very important, preferably the entire program of NPO races.

He plays the 1st NPO Department 9 from Brive 4.350 pigeons and also the 1st Zone 2 of the Northern Union(International).

Are Löwik Saturday had his pigeons to train and left again around quarter to nine in. Brother Aloys was well and good when just nine NL 07-1274314 ‘Rambo’, which was issued as a 3rd-drawn, are reported. At a distance of nearly 888 km. he is on 09.02.50 hours clocked. Direct will also sport friend Gerard Besselink called. This can not believe it: "I'm just going to get teletext ( TV Oost) and there is still nothing on "is his response. Moments later, the message is processed and the name Löwik pontifical only mentioned. 'Rambo' is the father of Old Saint Vincent Cock 1995, a son of the 'Dax-cock' in 1990 de 1e VNC won. This 'Old St.Vincentdoffer' father won itself 10 overnight rates. The mother of "Rambo" is a hen Harold Zwiers from Den Ham. .In 2008 he picked up as a yearling an early price on Frankfurt / Oder.

Last year he was the first long distance flight from Limoges injured at home. He then stood just in the outcome, but that season was no further play. Ben and Aloys Brive had a lot of confidence in him and put him in 3rd drawn from the 20 pigeons on the group letter. He was very fond of his young ten days when he was caught basket. In its totality it was with four awards from twenty pigeons on this Brive less results than what the brothers Löwik are normally used. But of course the first NPO for a lot, if not all. And what now continue with our 'Rambo'? As it looks now, he just goes on a long distance following command again with. Ben and Aloys, congratulations for this accomplishment. It is awarded by all of you heartily!